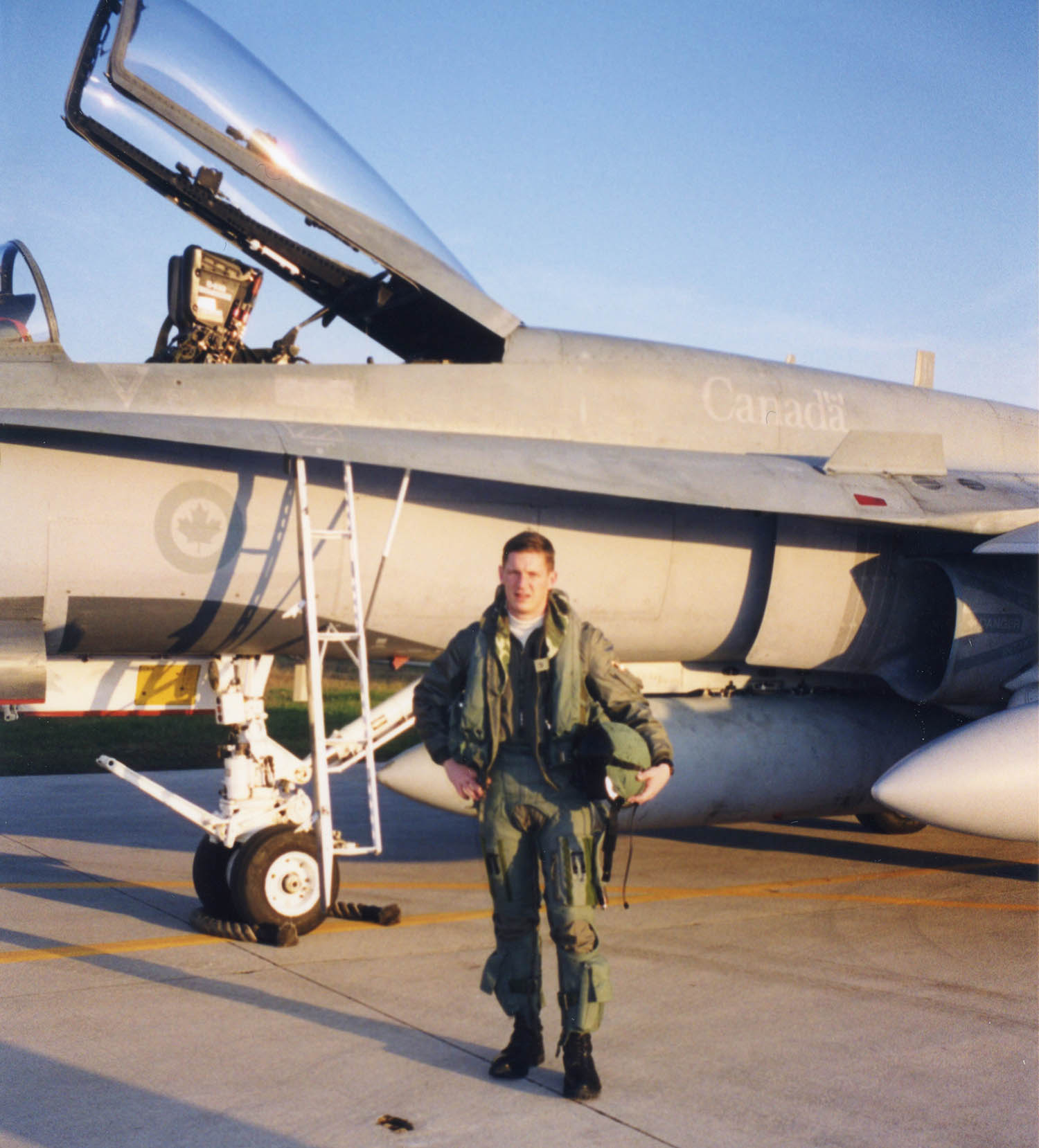 Posted at 18:45h in Stories by Patti McCord 0 Comments
0 Likes

At the time, I was an active duty Marine Corps pilot on exchange with the Royal Canadian Air Force, flying F-18s.  The onset of my UC was relatively sudden – it progressed from a simple increased urgency, occasionally with blood, to that being the status quo, with a loss of appetite, energy and weight.  In less than two months’ time, I went from flying full time, to grounded.  Two weeks after that, I self-admitted to the hospital, almost too exhausted to care for myself.

2. How did your journey change you?

My priorities changed.  Being a Marine Corps pilot and flying were my “identity.”  Suddenly, just being able to lead a “normal” life was impossible, much less fly an F-18.  My family, friends and thoughts of an ongoing relationship with a girl I’d met – and how this disease would affect all of those, went to the proverbial “head of the line.”  But in the back of my mind, getting back to flying was always lurking as a “how” and “what if?”

3. Is there a specific medicine/treatment/medical device/pharmaceutical company you are grateful for?

I think maybe the J-pouch procedure, though I probably didn’t realize it at the time, was a saving grace.  Since I had the procedure, I’ve learned what the “state of the art” was prior to the J-pouch and I don’t believe that nor current medications, would have allowed me to return to flying like I did.  That said, I understand that medical management of UC has progressed greatly so for folks that may not have the “requirements” that I did to continue my career, those medicines are probably a saving grace as the surgery had its own set of challenges.

4. Who are you most grateful for and why? (doctor, nurse, spouse, family member, etc.)

It would be hard to single out any one individual as my treatment and recovery were truly a team effort.  A former college roommate “opened doors” for me Bethesda Naval Hospital that allowed me to be medevac’d from Canada to the U.S.  My surgeon at Bethesda did a superb job and every gastroenterologist that has examined me since my procedure has been amazed at the work he did.  I had another former college classmate who was doing a medical internship and was part of my treatment team.  Former and current squadronmates in the Marine Corps and RCAF were amazing in their support.  My family was there every step of the way.  I still remember the day my Dad walked through the door of my room in the third hospital I was admitted to in Canada…saying “I’ve come to take you home.”  Such a surprise and so overwhelming.

5. How will you celebrate Grateful Patient Day on September 7?

7 Sept was a Monday…Labor Day, in 1998.  That was the morning, after a truly horrible weekend and night that made me feel near death (without too much exaggeration) that I somehow managed to walk the 3-4 blocks from my house to the clinic on base in Cold Lake, Alberta, Canada and “self-admit” due to my condition.  I was in the hospital (4 of them) continuously until Halloween ’98.  Then another stint three months later for the second surgery (New Year’s Eve, actually…not exactly Times Square!!!).

So, this year, I will reflect on how blessed I am, how well everything turned out for me, and for the passage (and gift of) time.